If you’re in the market for a home in Pearl City, you already know sales are hot in this neighborhood. The median Days on the Market statistic for a single-family home in Pearl City-Aiea in January was 19 days, with sellers receiving 95.6 percent of their original asking price. There were 18 homes that closed in January (the most recent set of statistics available at print). Well-priced condos are selling in only 11 days.

As brisk sales continue, buyers need to be quick on their feet to beat the competition. Still excellent buying opportunities exist. A mid-priced listing in Wailuna, with 4 bedrooms, 3 baths, 1,669-square-feet of living area, on a 3,780-square-foot lot is currently on the market (as of our print date) for $729,000. This is a great home built in 1987, with a split air conditioning system and a 2-car garage.

Freda Young agrees, the commute from Pearl City to town is much easier than it is from Kapolei or Ewa.

“The demographics include lots of older folks, many homes have been rebuilt to add on for their son/daughter or grandchildren,” says Young.

Bulseco says another one of the draws to the community is the impressive variety of restaurants.

Interesting to note that in Pearl City 72 percent of the residents own their home, compared to 55 percent of Oahu-overall residents. The median household income is $82,895. And while currently there are homes in Pearl City listed with as many as 7 bedrooms, in the last six months the 3-bedroom homes category was the most popular.

Seasoned buyers have found that it is common to be competing with other buyers on the most desirable listings.

“We continue to receive multiple offers on the majority of the listings we market for sale,” says Kalama Kim, principal broker at Coldwell Banker Pacific Properties. “Yet the National Association of Realtors March Home Survey reported that 75 percent of people believe now is a good time to buy a home and 44 percent believe that strongly.”

With the cost of rentals ranging from more than $1,000 for a studio or 1-bedroom, to nearly $3,000 for a 4-bedroom, at some point it does make sense to consider putting your money toward a mortgage and buying instead.

For your convenience, Coldwell Banker Pacific Properties is located at 98-211 Pali Momi, Suite 411, in Aiea. 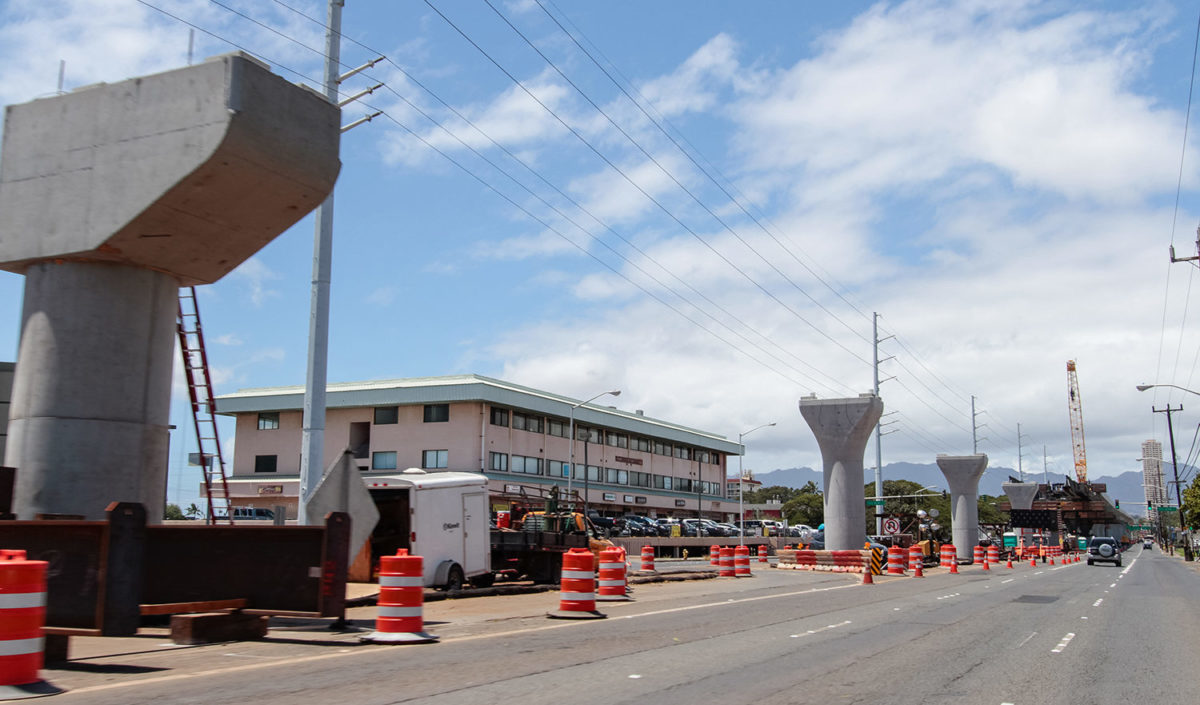 Construction of Oahu’s rail transit system is well underway. According to the Honolulu Authority for Rapid Transportation website, five miles of guideway has been completed, accounting for 25 percent of the project’s elevated 20-mile system. “This is an important milestone,” says Honolulu Mayor Kirk Caldwell. “This is a visual reminder of the fact that we are building our way to a better transportation future. As commuters drive by and look at the guideway, they know that an alternative to sitting in traffic is on the way.”

In the meantime, Young says, “Traffic has been a nightmare for folks due to the rail work.”

“While many people are excited about the rail and the Transit-Oriented Development (TOD), it is too early to see an effect on home sales,” adds Kim.

The Hawaiian Humane Society Paws on the Path hiking club will be exploring Manana Trail on June 25 at 8:30 a.m. This group of animal lovers takes a different pet-friendly trail on the last Saturday of every month. Led by an experienced hiker, the Humane Society hikes are intended to enhance the bond between humans and their dogs.

The Manana Trail hike is rated “beginner-intermediate” and the hiking time is estimated at 2 hours. Bring plenty of water for yourself and your animal. Stay with the group and always carry your cell phone. For additional information, call (808) 356-2222.

December 7, 2016 will mark 75 years since America was launched into World War II with the attack on Pearl Harbor.

It will also mark 10 years since the Pacific Aviation Museum Pearl Harbor opened its doors on historic Ford Island, vowing to honor the greatest aviators by sharing aviation history on the Pacific and the stories of the heroes of WWII.

On June 4th and 5th, visit the Museum for the 9th Annual Biggest Little Airshow in Hawaii. This year’s event will pay tribute to the 74th anniversary of the Battle of Midway. Each year, thousands of visitors drive onto Ford Island to experience remote control 1/5th-scale warbirds, jets, and helicopters performing aerial stunts; candy bombings for the keiki; aircraft displays; a keiki activity zone; prize drawings and hangar tours. In addition to these activities, this year’s event will commemorate the Battle of Midway, a four-day sea and air battle that was the decisive point, turning the tide of WWII in the Pacific.

On June 4, the public is invited to attend a Battle of Midway commemorative ceremony, reception and unveiling of a special display featuring murals painted during WWII and historic artifacts from Midway Island. For more information, call (808) 441-1013.

The USS Bowfin is a fleet attack submarine that fought in the Pacific during WWII and helped to make famous the term “Silent Service.” Bowfin was launched on December 7, 1942, exactly one year to the day after the attack on Pearl Harbor. She completed nine successful war patrols. She was nicknamed the Pearl Harbor Avenger, so it is fitting that she is permanently homeported at Pearl Harbor, right next to the USS Arizona Memorial.

Visitors to the WWII submarine are given a digital audio player, which narrates their tour as they explore and imagine what life on board must have been like for her 80-man crew. In 1986, she was designated a National Historic Landmark by the Department of the Interior.

The USS Bowfin Submarine Museum and Park is one of four attractions that cooperate in telling the story of the attack on Pearl Harbor and the history of the War in the Pacific — the others being the USS Arizona Memorial, the Pacific Aviation Museum, and the Battleship Missouri Memorial.
Story by Lisa Scontras.