From Kahaluu to Kahuku: Beach Town Housing Markets on the Windward Coast

Starting from Kaneohe and traveling toward Oahu’s North Shore, you’ll find Oahu’s quaint beach communities — uncrowded, unpretentious, and quiet — and some of the most alluring coastline, culture, artists, and friendly people around. If you’re house hunting for someplace off-the-radar, this remote, almost untouched part of the island may be just the escape you’re looking for. And while the windward coast may seem remote, it is not as far as you think. Most residents commute into town to work, and simply relish the peaceful at-home time.

Neighboring Kaneohe, this community is home to a population of nearly 5,000 residents. Demographics show the median household income in Kahaluu is $85,971. (Median income means that half the incomes are above $85,971 and half are less.) Fifty-six percent of the residents are married, the average age is 34, and the median commute is 33 minutes or more to work, with 74 percent of residents holding white-collar jobs.

The median age of homes in Kahaluu is 29 years. Fifty-seven percent of the homes are owner-occupied. What the statistics don’t show are the picture-perfect beaches, such as Kahaluu Beach Park — a quiet pace, and lush landscapes, this is an idyllic place for families who want the small beach town feel.

“Kahaluu is where (the windward coastline) starts to be a more rural, coastal lifestyle, with the Hygienic Store being the most notable landmark,” says Phoebe Nikolakakis, Realtor Associate with Coldwell Banker Pacific Properties and Windward coast resident of 12 years. “Waihole and Kahana valleys are both steeped in history with their rich mountain-to-sea farming to fishing lifestyles. Waihole Poi Factory has ono Hawaiian food. On weekends, Kahana is filled with campers, boaters and more beach goers.”

Ahupua‘a O Kahana State Park was established as a “living park,” to nurture and foster native Hawaiian cultural traditions and the cultural landscape of rural Windward Oahu. Once a thriving fishing and farming community, there are now 31 families living in the park, who assist with the interpretive programs and share the Hawaiian values and lifestyle.

There are ten beachfront campsites available, by permit and there are two hiking trails available to the public, for relatively easy walking (no permits required for hiking). Maps are available at the Orientation Center. For more information, click here.

Heading north along Kam Highway, the next stop is Ka‘a‘awa, the rural neighborhood with a population of 1,427 people, who are of a median age of 35. Fifty-seven percent of the residents are married, and the median income is $83,193.

With 40 percent of Ka‘a‘awa households having children, the out-of-the-way neighborhood has many demographic and socio-economic qualities tied to the development of a good school system. The result is an attractively high educational climate index rating. For more information, check Coldwellbanker.com.

The summer months in Ka‘a‘awa are particularly beautiful and appealing, especially if you’re looking for a reprieve from zipper lanes and conference rooms.

“When I think about Ka‘a‘awa, I think sandy beaches along Kamehameha Highway that are busy with campers, boaters and more beach goers,” says Nikolakakis. “This community is a collection of longtime residents, their families and those looking to live closer to the water at reasonable prices. When you drive through the area, you’ll see new homes going up.”

Moving mauka, into the valley of Ka‘a‘awa, you’ll find Kualoa Ranch. Besides its grass-fed cattle and hormone free beef, Kualoa Ranch is known for being the site of Jurassic Park dinosaur scenes — because of the show-biz ties, this area has earned the nickname of the Backlot of Hawaii. The Movie Sites and Ranch Tour at Kualoa Ranch will take you to see the Jurassic Park site, to Godzilla’s footprints, the Windtalkers battleground, as well as filming locations from 50 First Dates, Pearl Harbor, Along Came Polly, You, Me & Durpee, Karate Kid and Lost. For tour information, call (808) 237-7321.

“Hau‘ula is another coastal community with a fair amount of building going on,” say Nikolakakis. “There is a focus on getting the ocean view and the seaside lifestyle. My favorite place to eat there is the Shrimp Shack.”

Home to a population of 4,437 residents, the perfectly secluded neighborhood of Hau‘ula has an owner occupant ratio of 50 percent. The median household income is $68,645, and approximately half of the population commutes 33 minutes or more to work, with 71 percent of the residents holding white-collar jobs.

The median age of a home in Hau‘ula is 32 years old.

Being so far from the city lights, this part of the island is a great place for stargazing at night. The relaxed vibe, gentle surf and beautiful sunsets are all part of the hidden charm of Hau‘ula. Think laid back.

Home to Brigham Young University Hawaii, the Laie Hawaii Temple (one of the oldest operating Mormon temples in the world) and the Polynesian Cultural Center, Laie is the most populated of the neighboring Windward Coast communities. Still, the popular neighborhood of Laie has only 6,000 residents, give or take — 52 percent of whom are married and 68 percent of whom are families with children. The median income here is $83,815, half the population travels for 9 minutes or more to go to work, and 72 percent hold white-collar jobs.

Homes in Laie tend to be slightly newer than Windward Coast neighbors — with the median age around 28 years old.

The Polynesian Cultural Center is perhaps Laie’s biggest attraction, drawing 37 million visitors from around the world annually. A day at the Polynesian Cultural Center is a cultural exploration at six island villages, including Hawaii, Samoa, Tahiti, Tonga, Fiji and New Zealand, as well as the Rainbows of Paradise canoe pageant and a cinema presentation. Activities at each island village allow guests to engage with the native people of each culture in fun, hands-on traditional activities, such as spear throwing, canoe paddling, and food preparation. The show at the end of the evening, showcases performers from each of the Pacific island nations and a cultural immersion in the people, history, lifestyle and traditions of Polynesia. 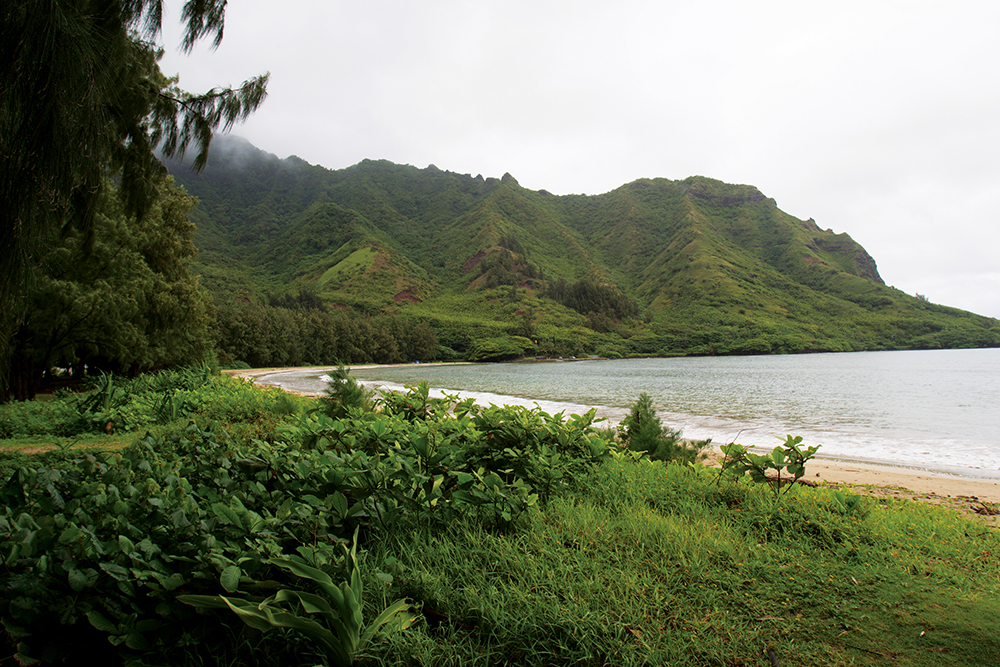 Continuing north on Kam Highway, you’ll know you’ve come to Kahuku by all the shrimp trucks along side the road. If you like shrimp, you can’t miss the shrimp farms or the ready-to-eat shrimp restaurants and wagons along this stretch.

The community of Kahuku has a population of approximately 2,691. The median income in this part of the Windward Coast is $63,541, where 55 percent of the residents are married, and families with children make up 45 percent of the households. Half the population commutes 16 minutes or more to work, and 82 percent hold white-collar jobs.

The median age of a home in Kahuku is 21 years old, and 46 percent of the homes are owner occupied. 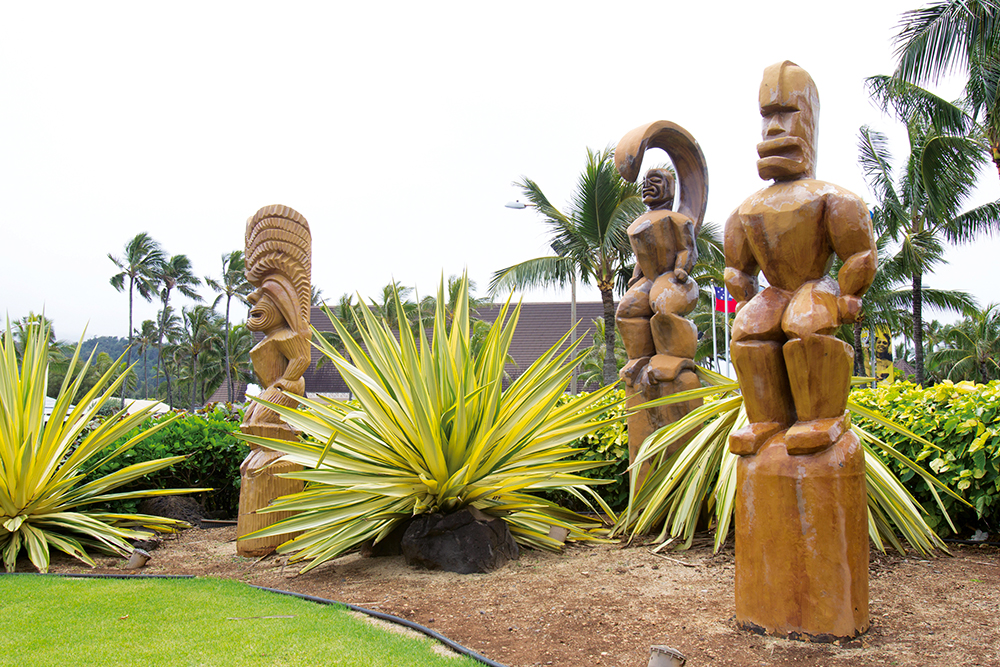 Commanding almost five miles of beachfront, Turtle Bay is the only resort destination on the North Shore. A 55 minute drive from Honolulu, the oceanfront tranquil setting at this luxury resort seems worlds away from the hustle and bustle of the city. Accommodations range from beach cottages, to villas, guest rooms and suites.

Recently, Governor Neil Abercrombie signed a bill to preserve 665 acres of coastline on the North Shore, including Kawela Bay, protecting it from future development and ensuring public access for generations to come.

On August 23, the resort hosted the Inaugural Turtle Bay Biathlon, with a 1,000-meter swim along Kuilima Bay, plus a 5k trial run around Kawela Bay.

Later this year, Turtle Bay will host the Stand Up World Series Finals on Oct. 3-5.